We can enter it through Higashi Ote-mon gate (east gate), typical massive gate may not be harmonized with surrounding elegant atmosphere. 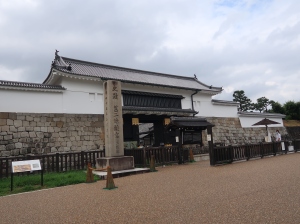 . The gate was altered for the visit of the Gomizuo Emperor to one-storey avoiding look-down.

The Karamon Gate, relocated from Fushimi Castle originally set up, it has typical decoration of Momoyama era magnificent and brilliant carvings of auspicious symbols. 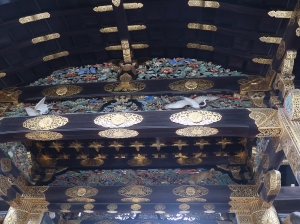 Ninomaru-goten palace, connected buildings, is archetypical of the shoin-zukuri style, visitors can admire wall paintings, carved transoms and exquisite metalworks of 33 rooms walking through “nightingale corridors”. As it is prohibited to take photos, please find form here if you want to see inside. https://nijo-jocastle.city.kyoto.lg.jp/introduction/highlights/ninomaru/?lang=en 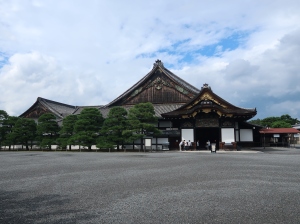 Ninomaru garden was built according to the Shinsenhorai ideology forming paradise, which is designed to be enjoyed from Shogun seat in some rooms in the palace.

The base of the keep tower, on this place a five-storey with 6 floors tower used to stand however was struck by lightning and burned down and never rebuilt. 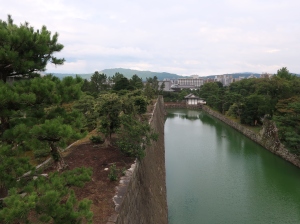 From the base of the keep tower we can enjoy views of city of Kyoto.

I was able to relax in newly constructed Seiryu-en garden northside of the castle. 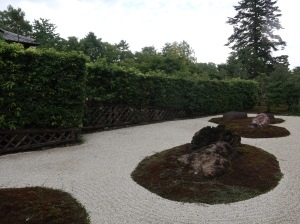