As I can feel a lit bit cooler at just September, I visit an exhibition: Dreamed childhoods – Bonnard, the Nabis and childhood at Mitsubishi Ichigokan Museum, a building was designed in 1894 by the English architect Josiah Conder and constructed by Mitsubishi as the first Western-style office building in Tokyo’s Marunouchi district.

The original structure was torn down once in 1968, but it has been reconstructed on the same lot according to Conder’s original plans. 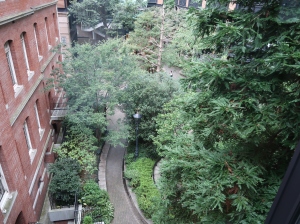 Therefore, the Museum plans exhibitions mainly focused on artworks developed in end of the 19th century and beginning of  20th such as Impressionism.

This exhibition is focused on children painted mainly by the Nabis at the end of the nineteenth century.

I can find interesting influences from Japanese Ukiyoe in some pictures although I cannot show them here.

It is my first visit after COVID19 in Marunouchi area and good for since I can feel vibrant feeling slightly in there.