I visited a museum named Edo-Tokyo Museum in Ryogoku, Tokyo.

At the museum, we can learn history and culture from Edo (former name of Tokyo) to Tokyo. 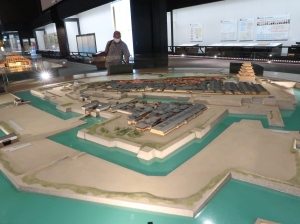 As the museum was in a few days after reopened as the lift of emergency declaration by the COVID19,

there were few visitors, I could watch them smoothly.

There are many interesting exhibitions such as replicas, scale models and panels with English explanations,

so we can learn by enjoying and effectively.

If you are interested in history and culture of Edo and Tokyo, one day might not be enough to learn by walking along designed route.

Also, there are many attracting place around the museum in Ryogoku area, such as Kokugikan (National Sumo Stadium) Sumida Hokusai Museum

and Ryogoku bridge over Sumida river.